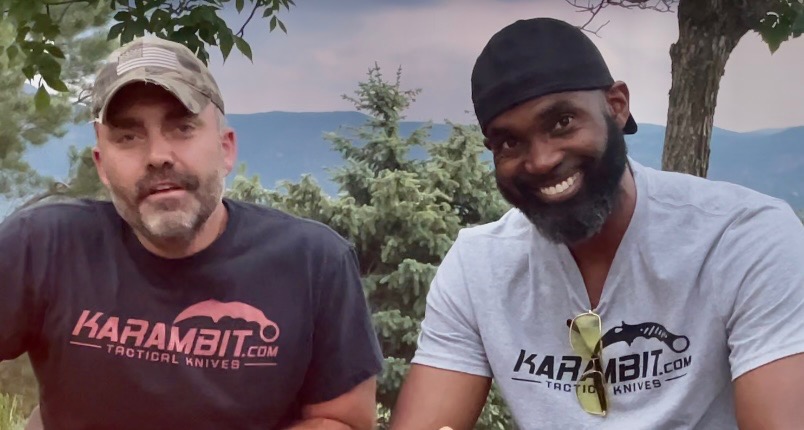 (Pictured above are: The new owners of Karambit.com, Phillip Koontz (on left) and William Simkins (on right))

Karambit.com – the world’s leading e-commerce site for karambit tactical knives and weapons - announced new ownership and leadership. Longtime customer and former Navy SEAL, Phillip W. Koontz and business partner William Simkins have assumed the roles of owners and co-operators as of May, 2021. Terms of the deal were not disclosed.

“As a military guy and regular karambit customer who has used our products both on and off the battlefield, we could think of no better person to turn the keys over to than Phillip,” says Dennis Christo, founder of Karambit.com. “We are confident in Phillip’s passion for the product and Will’s financial acumen to carry the Karambit.com legacy into the future.”

Monument, Colorado-based Phillip Koontz spent six years as a Navy SEAL before he was honorably discharged in 2009. He has since spent his time as a motivational speaker for business, academic, athletic, and religious-based audiences. He incorporates the karambit knife into many public speaking presentations.

Will Simkins of Ashburn, Virginia has a long family legacy with the military, but opted to spend his career as a serial entrepreneur, most recently with his own financial planning consultancy. Simkins serendipitously met Koontz during one of his motivational speaking engagements, and the two quickly became friends, then business partners.

Karambit.com was founded in Sept 2013 in Los Angeles, California, and has since quickly become the largest supplier of high quality custom karambits in the world.

If you are interested in this wonderful style of blade for law enforcement, military, or civilian self defense use, you've come to the right place!

If we can help you in any way, feel free to contact us!

My story starts in a run down neighborhood near downtown LA. After investing and working in a failed Silicon Valley start up, and several months of being broke and frustrated, I moved from San Francisco to Los Angeles January 1st, 2013. I found a cheap place for rent that was supposed to be "temporary" while looking for something better.
After about 6 months of "temporary", the police helicopters (AKA ghetto birds) hovered about almost nightly with their "all eyes on you" spotlights shining through my window in passing were a constant reminder of being stuck in a place I didn't feel safe in and didn't want to be. The area was a poor neighborhood next to a very rich private school, ironically filled with vagrants, gangs, and drunk college students causing trouble on a regular basis.
After having called the police more than a few times for thieves trying to steal bikes from our backyard, the screams from the dirty work of a wife beater across the street, and witnessing multiple street fights at 2am, I started to feel like I needed something to protect myself should I find an unexpected situation. Since California makes it very difficult to attain a CCW (Concealed Carry Weapons permit), a pocket knife was the next best thing. I had been carrying a small $5 pocket knife for quite some time, but I had no clue how inadequately prepared I was until I started my shopping research.
I came across knives that were $10, $20, $50, $100, $300 and up - and my first question was WHY would someone pay so much money for a knife? That's CRAZY! If it cuts, it cuts! There had to be a difference in the price ranges that made logical sense.
My research brought me to a youtube video that discussed knife qualities and how to test a knife to see if it's any good - the first and foremost being the "spine whack". I took my little pocket knife, opened it, and smacked the spine on the desk as I saw in the video. Luckily, I had the foresight to keep my fingers out of the way before trying this test because the liner lock on my cheapo knife failed and the blade snapped shut.  I would have cut myself pretty bad otherwise.
First question answered - If i were to have used this knife in a fight to defend my life on the street, I'd be short a few fingers and instantly be at a disadvantage when it counted most - this just caused me to ask even more questions.
What's the difference in quality? I watched more videos to learn about different steels, about carbon vs stainless - rust resistance, rockwell hardness equates to durability, and craftsmanship, and high end custom knives - there was a whole lot more to learn than I had ever expected!
What kind of knife do I want? Well, when I was a young dumb teenager, I carried a butterfly knife. I thought it would be cool to try to pop a truck tire. The knife handle was very smooth, with no texture or grip, and not too sharp. The first attempt to stab it did nothing. I used more force, and it popped the tire, but the force from the thrust caused my hand to slip forward, slicing open my own thumb in the process - leaving me bloodier yet wiser for life. Another lesson learned.
Armed with all this knowledge and wisdom, I wanted something that looked cool, worked well, and would prevent me from cutting myself. My friend Rob had a curved claw like pocket knife from a flea market that I really liked the look of, but he didn't know what it was called...and then i found it on the internet. It was called a karambit.
The karambit led me to the Fox 479 karambit, featuring the Emerson Wave feature and I was HOOKED (pun intended). I had never seen a legal knife that could open so fast without springs before and I wondered why I hadn't heard of this my entire life before. It was a little known knife with very few places selling it and I saw an opportunity to change that by providing education and a never before seen selection. Karambit.com was born a few months later, and we've been growing ever since.
From my life's hard lessons to your mailbox, Karambit.com brings you the largest selection of the finest quality karambits from the hottest brands and knifemakers on the planet.
Remember, never trust your life to a $5 knife.
Sincerely,
Dennis
Original Owner of Karambit.com
×