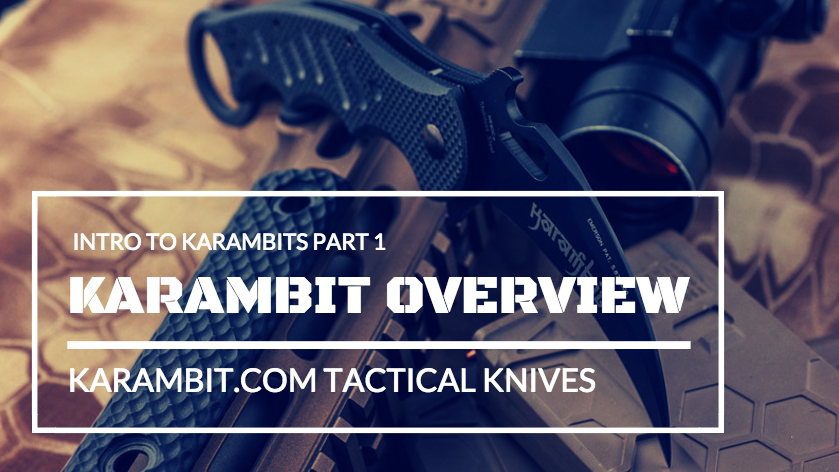 What is a Karambit?

The karambit is a multi-use knife designed for user safety, precision, and efficiency. Karambits have a curved or hooked blade, an ergonomic handle, and typically least one safety ring. With a design that's thousands of years old and tons of old world charm, most karambits are quick to draw the eye. They’re sleek, built for a purpose, and time tested. When it comes to every day carry (EDC), knife fighting, and self defense, few blades have the karambit’s long standing history of success.

The forebearer of the modern karambit first surfaced in Indonesia during the 11th century as a farming tool and utility blade. Due to Indonesia's thriving trade industry, the karambit quickly spread throughout Southeast Asia. Eventually, the blade developed strong roots in Malaysia and the Philippines, where it was used as a defensive and backup weapon and for every day chores. Over thousands of years, the karambit became entrenched in the warrior culture. It’s now an iconic weapon associated around the world with the Southeast Asian martial arts of silat, eskrima, and kuntao. Karambits have been around for nearly 10,000 years. When anything lasts that long, there's generally a good reason for it.

While a traditional karambit’s exact design may vary slightly depending on its exact geographic origin, a karambit will always have a curved blade reminiscent of a tiger’s claw or a talon. The blade should be optimized for tearing, ripping and slicing. The handle should be designed for stability and a secure grip, even in sub-optimal conditions. 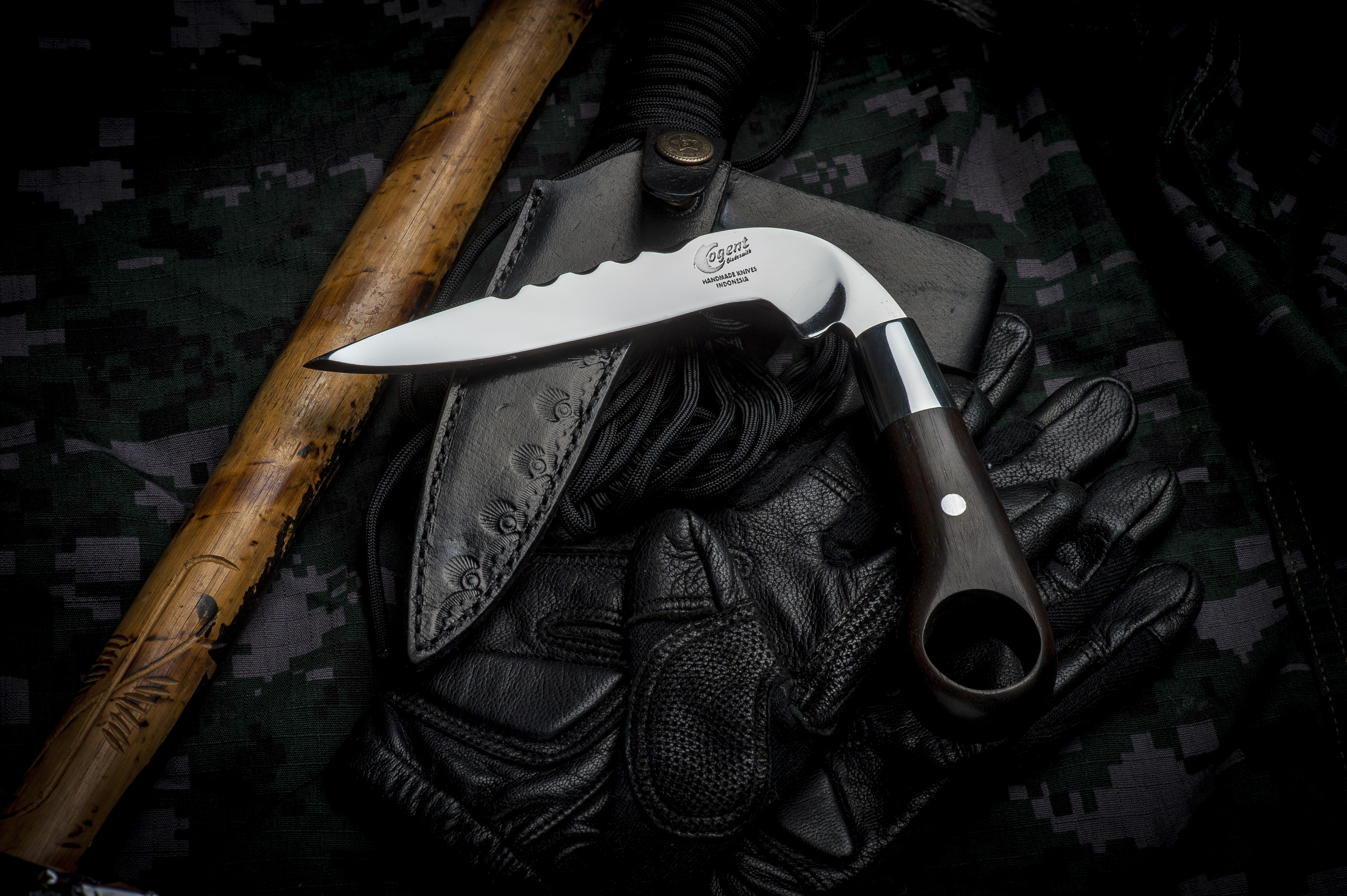 When most people think of a traditional karambit, the traditional Indonesian karambit design comes to mind. The curve is sharply angled, and may even approach 90 degrees at times. The handle is almost always wood, but may be bone or stone. The entire knife may feature intricate detail work on the blade, handle, sheath, or all of the above. Traditional karambits are handmade and highly prized.

Modern karambits may provide an upgrade as far as materials and durability go, but the traditional karambit design is hard to beat. Modern karambits usually feature a less stark curve and more complex designs. Some modern karambits showcase features like back blade serrations and hooks, multi-edged blades, or better concealment options. No matter the design, though, a karambit will usually offer its user functionality straight blades cannot. The curved blade allows for easier cutting of difficult materials, better access to targets, and the ability to use unorthodox angles and approaches.

Very early versions (11th-14th century designs) of the Filipino karambit and Indonesian karambit may or may not have possessed a safety ring, which is also known as a retention ring. As centuries passed and the blade's function, features and use evolved, though, the safety ring essentially morphed into a karambit design requirement. A karambit's safety ring is usually positioned at the end of the handle, which allows the user to insert a finger through the ring before closing their hand on the knife's handle. Some karambits have a secondary safety ring located on the shaft of the handle just below the blade itself, which allows palming the blade. 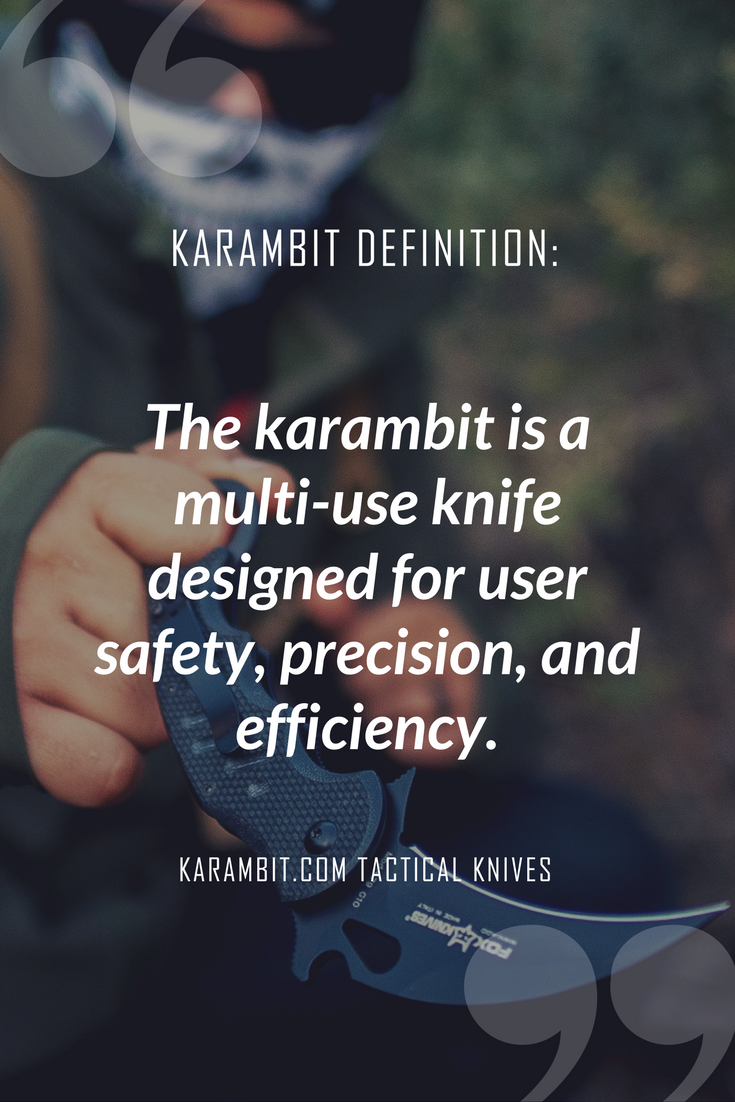 The safety ring was originally designed to prevent the blade from sliding back through the user's hand while working at odd angles, on difficult tasks or in specialized environments (like underwater or while hanging upside down). In battle, the safety ring provides a strong, sure hold in all conditions and during unexpected stressors. The karambit's safety ring makes the knife difficult to disarm or to turn against its user. It also allows the wielder to rely on the blade’s design for increased weapon retention instead of depending on grip strength alone.

Whether the user’s hand is open or closed, moving or motionless, palm-up, palm-down or anywhere in between, due to the safety ring, a karambit is always secure and in an optimal position for use. Furthermore, the grip security and increased weapon retention is particularly valuable when the knife is covered in dust, mud, water, or blood and when the karambit is being utilized at the difficult or precise angles required in combat

What Are Karambits Used For?

The short answer is “everything.” Historically, the karambit was widely used as a utility blade during routine chores. It would have been considered the EDC blade of ancient Southeast Asia. Even today, in remote Filipino and Indonesian regions, karambits crop up as the "pocket knife" of choice. For thousands of years now, karambits have been valued for their concealability, precision, and stability. The curved blade and secure grip are great for cutting rope and vines, hunting chores, and other common tasks.

They’re prized for their unique suitability as an EDC blade. Few blades possess the karambit’s versatility, especially when it comes to applicability in tasks ranging from chores and work use all the way to spec ops field use and backcountry performance. This unique little knife can complete just about any task set before its carrier, including combative use or self-defense applications. While the blade originally served as an ancient utility tool in the same vein as the modern-day "Swiss Army Knife," in the war-torn villages of Indonesian and the Philippines, its features readily lended itself to battlefield use, which is where its design was refined and perfected.

In a knife fight, the blade's arc offers the ability to fluidly attack and counter in a single motion and to change directions of movement with ease. It also allows striking from multiple lines of attack at once, even if you can’t see the angle in question because it’s behind your opponent. The karambit's design readily enables hooking, trapping and otherwise manipulating your adversary’s position, limbs and direction of force. This creates a significant combative advantages for the fighter with the karambit. Additionally, many karambits have multiple cutting surfaces or edges arranged in various configurations, each of which provides distinct advantages and benefits for both utility and tactical use.

Only a few weapons and tools can match the karambit’s ability to deal out damage as easily or efficiently as a karambit. Possessing a deadly grace and dark appeal, karambits leave wound channels that don’t heal well due to the gaping, yet penetrating, nature of the cut. For a proficient karambit user, the ability to effortlessly maneuver the blade into a variety of positions without fear of losing their grip on their weapon is priceless, especially during the unpredictability of combat. 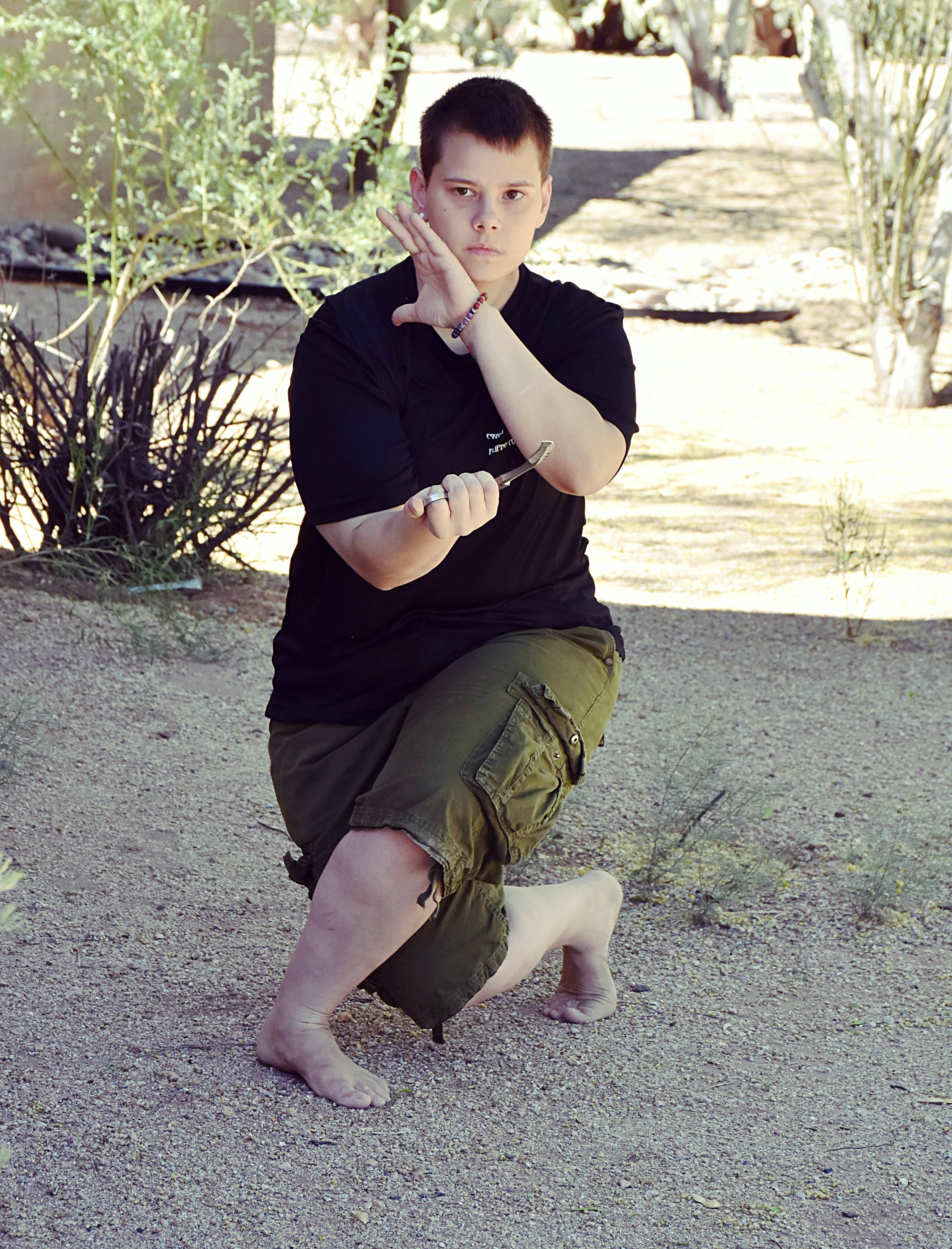 At some point , the karambit became intertwined with Pencak Silat (also spelled Pentjak Silat), the indigenous and unimaginably deadly close-combat fighting art of Indonesia. It is now widely recognized as one of several traditional weapons commonly associated with silat, kuntao, and several other Southeast Asian martial arts, including Filipino kali and eskrima. It’s hard to say whether the art and battle impacted the karambit’s design or the unique combative advantages of the karambit influenced the development of Pencak Silat.

Regardless of whether the chicken or the egg came first, though, the karambit is a feared and formidable tool of destruction when found in the hands of a skilled pesilat (silat player). A “player” in the Southeast Asian arts describes anyone who practices one of the Southeast Asian martial arts, including not only Indonesian pencak silat, but also Filipino kali, arnis, eskrima, Malaysian bersilat, Bruneian arts, and Kuntao. It’s very rare to find a skilled karambit player who doesn’t practice one of the Indonesian, Filipino or other Southeast Asian martial arts.

Many Names, Many Uses

The exact spelling of “karambit” can vary regionally and between various martial arts, but both “karambit” and “kerambit” are commonly accepted as correct. The blade’s name is sometimes misspelled as "korambit," "kerambet," "carambit," and in other creative ways, but regardless of how it’s spelled, the pronunciation is almost always "kah-RAHM-bit" or “keh-RAHM-bit.” In the Philippines and in many of the Filipino martial arts (kali, eskrima, arnis), the karambit is known as a "lihok" or "sanggot."

No matter what you call a karambit, one thing is for sure: it’s unmatched for its tested combat prowess, proven tactical advantages, and time-honored battlefield finesse. It’s ability to perform every day chores and tasks and immediately allow its user to protect themselves from harm in whatever form it takes can’t be beat. This versatile and highly functional blade is carried around the world by outdoorsman, ranchers, farmers, soldiers, operators, security experts, first responders, and many others, and for good reason: karambits can do it all, and do it well.